Too much of a good thing…is wonderful!

Some of you may recognize the title of this post as a quote made famous by Liberace – one of Las Vegas’ greatest showmen of all time. Earlier this week, Chuck and I watched the HBO movie, “Behind the Candelabra”, about the life of Liberace behind all the outlandish costuming and showmanship. I was in awe of Michael Douglas’ performance as Liberace. If you haven’t seen the movie, it is worth a view.

The film got me to thinking about a past foray to Las Vegas, Nevada – a town that has the fine art of showmanship mastered! We were only in town for a couple of days but consider ourselves lucky that it occurred during the six weeks when the Liberace Exhibit was on display at the Cosmopolitan.  At the time, this was the only way to see any of the memorabilia as the Liberace Museum closed in 2010 and hasn’t reopened. 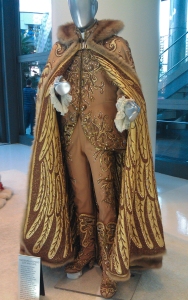 The exhibit was billed as Liberace’s ‘return to the strip’ and it was wonderfully displayed in the windows of the Cosmopolitan. Seeing his costumes up close and personal were phenomenal with the details of the stitching and the careful placement of thousands of rhinestones, both inside and out on his over garments. With all that adornment, one of the capes weighed over 80 pounds! Having backpacked a few times in my life with a 35 pound pack on my back, I still find it amazing that this guy performed with the equivalent of two and half packs draped over his shoulders. What the guy wouldn’t do for the show!

I remember seeing Liberace on television when I was little. I can’t recall if my parents were fans or not, and I was too young to care, but I do remember seeing him drive out on stage in a car covered in rhinestones and play a piano all covered with rhinestones with a glitzy candelabra on top. It was a spectacle and it made an impression even to a five-year-old. Upon walking through the casino doors at the Cosmopolitan, the rhinestone studded car was sitting there to great you and the piano was right around the corner. Again, what showmanship! 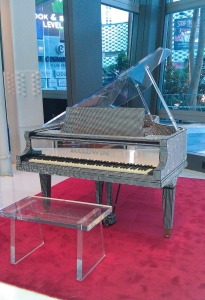 While I haven’t been back to Vegas in the past two years, I did recently read that the Liberace cars are now viewable again at The Liberace Garage for to price of a $14 ticket. As for those incredible costumes, they are available for you to see if you sign up for an exclusive, private, guided visit to see The Liberace Museum Collection. As I understand it, for roughly $130 per person, they will pick you up from your hotel on the Las Vegas Strip and take you to the venue where you are served a light champagne lunch at Michael Jackson’s Thriller Villa and given a tour of the memorabilia. Liberace has long left us but his showmanship lives on!

I am Theresa - the 'T' in CatTail Studio Arts. My husband, Chuck, is the guy behind the 'C'. Our tales cover our many interests including good food, adventurous travel, cooking, gardening, hiking, cycling, crafting ceramics, beekeeping and occasionally even cat tales!
View all posts by CatTail Studio Arts →
This entry was posted in Offbeat, Out and About in the USA and tagged Behind the Candelabra, Cosmopolitan, HBO, Las Vegas, Liberace, Liberace Garage, Liberace Museum Collection, Michael Douglas, Nevada, showmanship. Bookmark the permalink.